IRISH JACKPOT WINNER KEEPS IT IN THE FAMILY 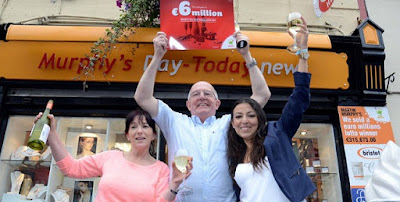 Winning the lottery is one thing, but Gerard Murphy “kept it in the family” as his winning jackpot numbers were bought from his brother-in-law’s store.

Gerard’s winning numbers were based on the same numbers he had been playing for 20 years, these lucky numbers had been derived from the birthdays of his four children.

Martin Murphy, the store owner, congratulated his brother-in-law and said that he couldn’t be happier for him. “Little did I know, that one of my very own relatives had bought the winning ticket,” he admitted to lottery officials. “I just couldn’t believe it when Gerard popped in to say he had the winning ticket.” He added “It’s a massive win and it’s great that his mother, Mamie, is still alive to celebrate the big win.”

Gerard has been very calm about his win, ever since he found out and even though he is now a multi-millionaire, he plans to continue working at his current job.

The Irish Lotto winner, Gerard Murphy, had been playing his lucky numbers for a long time until this massive win came his way. So don’t get disheartened if your numbers come back unlucky for quite some time. Just keep the good energy up, all big wins take time, if you think positively you will attract positive things to come your way.

You too can play the Irish Lottery with Lottery Network, it is an insured game with the maximum payout of €10,000. Tickets cost from as little as €1.00 and the results are based on the real draws.

Posted by Virtual Assistant at 12:36 am

LICENSE YOUR CASINO GAMES GamblingTec is a simple and cost-effective way for you to license your casino game.