Everything to know about Euromillions

EuroMillions is a transnational lottery, launched on 7 February 2004 by France's Française des Jeux, Spain's Loterías y Apuestas del Estado, and the United Kingdom's Camelot. The first draw was held on Friday 13 February 2004 in Paris. Initially, only the UK, France, and Spain participated, with the Austrian, Belgian, Irish, Luxembourg, Portuguese and Swiss lotteries joining for the 8 October 2004 drawing.

Draws are held every Tuesday and Friday night at 21:45 CET in Paris. A standard EuroMillions ticket costs €2.00, £2.00 or CHF3.00 per line played, depending on the local currency. (An option, called Plus, currently available only in Ireland and Portugal, adds €1.00 per line.) The cost of playing in the UK increased from £1.50 to £2.00 per line on 7 November 2009, due to the combination of: the EUR/GBP exchange rate, and an automatic entry in its Millionaire Raffle.

All prizes, including the jackpot, are tax-free (except in Switzerland) and are paid as a lump sum.

Any person 18 or over who resides in a participating country. The minimum age differs in some countries, e.g. it is 16 years in the UK.

The only official online ticket agent is: www.playeuromillionsonline.com 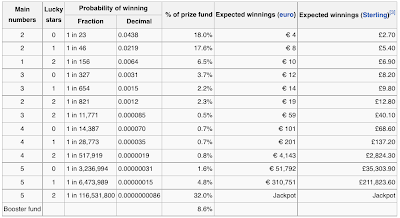 The booster fund is available to contribute to the jackpot, for example to boost the initial jackpot in a sequence of growing jackpots. The amount utilized each week is determined in advance by the participating lotteries.
Effective November 7, 2009 new rules were put in place regarding rollovers.[4]
A new rule change of 12 January 2012 locks the Jackpot cap at €190,000,000 permanently and if the jackpot is not won after two draws, the prize money will be distributed amongst the winners at the next level.

The participating national lotteries in the EuroMillions game have each established a EuroMillions Trust account. This is used for the settlement of all amounts due and for holding amounts in respect of future prizes. This trust arrangement protects the participating lotteries between them from a default from one of the national companies and ultimately the players interests.

Super Draws and Event draws are special drawings when the Jackpot is set to a guaranteed amount (often €100 million or €130 million at times), regardless of the expected Jackpot. The difference being that a Super Draw jackpot will roll over to the next drawing if not won but an Event Draw jackpot will be distributed amongst the winners in the next lower tier (i.e. match 5 + 1).
The first Super draw of 2011 took place on Tuesday 10 May to mark the introduction of the second weekly Euromillions draw and changes to the game format (11 lucky stars instead of 9 and a new "match 2 main numbers and no lucky stars" prize tier)
Super draws have been held to date on
(This is a change to the game rules as of April 4, 2011 when the Event Draw was added. To date, there is yet to be an Event Draw.) 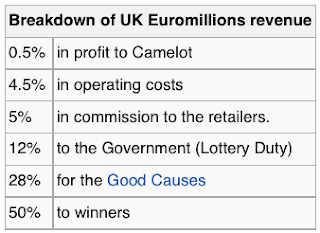 In the UK, the total Euromillions revenue is broken down as follows:

In June 2009, a Belgian newspaper claimed the National Lottery made up the profiles it announces of the EuroMillions winners. The names of Belgian winners are not normally released, except for a summary profile such as "a woman in her forties with two children." The newspaper claimed these profiles were entirely made up for commercial reasons, to make them more identifiable to the majority of players. For example, one winner who was an elderly woman from Blankenberge was turned into "a family with three children from Gent." A high-placed former employee claimed he was ordered to make up the profiles, while the directors of the lottery claimed no such order was ever given. Simultaneously, there were claims that the National Lottery had covered up a major case of fraud in which sellers of tickets had swapped winning tickets for losing ones, keeping the earnings to themselves; though it was not clear whether this involved any winning EuroMillions tickets as well. The National Lottery admitted there was such a case of fraud, but said it was a very minor case only involving a single ticket worth 2.5 EUR.